The town Villach is located at the entrance of the Drau into the Kärnten basin at the meeting of important traffic routes (Drautal, “slanting passage” along the Ossiach Lake, Gail and Kanaltal) and is considered to be the gateway to the south.  Named as a bridge town in 878 already the region was gifted by King Heinrich II to the Bishopric Bamberg and by Heinrich IV it was equipped with wide reaching market privilege in 1060. Villach was walled in 1233 and recognized as a town in the full legal sense in 1240.  Although Villach rose through the middle of the 14th century to one of the most significant trade centers in the eastern Alpine area it could, due to its association to Bamberg which lasted till 1759, not become capital. In the 17th century an economic decline began which could only be compensated for after 1868 through Villach’s development to a train hub with a seat of the state railway directorate and workshops.  … this history you can experience and feel as a guest in our house …. 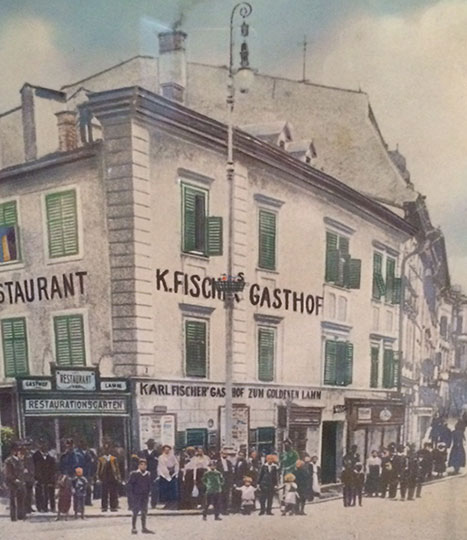 The location of the Golden Lamb directly at the city wall and at the bridge over the Drau was since time immemorial something special and privileged.  From records of the Museum Villach it becomes apparent that our house was, so to say, a predecessor of the current finance office. Here at this strategic location the “entrance fees” for passing into the city were collected. An old pillar in the Cafe Restaurant Golden Lamb is a witness of this time and, with its guild sign of the venerable stone mason, the oldest standing relic of this time.

With pride we can say that the Golden Lamb was equipped with a hosting concession since the beginning of the 19th century.  On 11.07.1853 the concession to brewing was awarded to the inn as well which in consequence was run as a guest and brewery house.  As of 1.08.1865 the inn is advertised as having “good and neat passenger rooms”.

To the inn belonged, at least in 1885 a bowling lane, which is being described as a “gambling den” in a letter to the editor of a local newspaper.
1892/93 aside of the inn the following businesses are in the building:  Carriage and coach business, skinner, gold and silver works as well as a butcher with entrance in the Gerbergasse 4.

In a council protocol from July 28th 1893 can be read:  GRANT OF HOST LICENSE TO FRANZ FISCHER on the grounds …. “that this inn  is to be commended warmly with respect to the significant frequency and when considering the rising tourism for the needs of the local as well as the foreign audience.”

1894 the following listings appear:  “Gasthof to the Lamb, beautiful location lovely rooms very good food at moderate prices.” In every regard a “recommended accommodation”.
On 11.27.1905 the serving of distilled drinks is authorized and approved.
On 3.5. 1910 the owner of the inn, butcher and building Franz Fischer dies at the age of 66.  Maria, his wife, takes over the business and dies in 1926. In 1912 the Golden Lamb had 35 rooms. 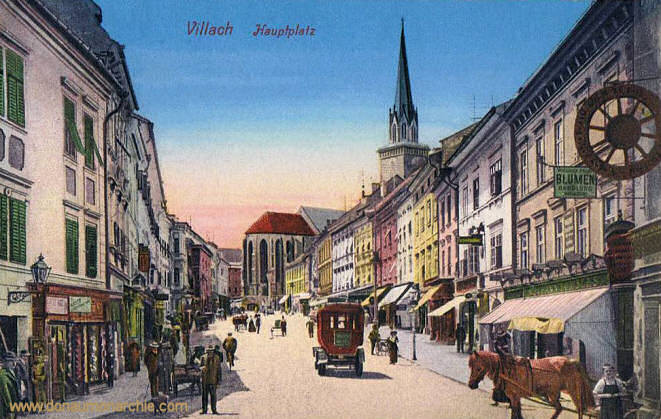 The two portraits of the significant and hardworking hotel founders Maria and Franz Fischer can be seen in the entrance at the reception.

Up to 2015 the business was run by the renowned hotelier family Fischer.  Renate Fischer, the last owner of the family, managed the hotel with lots of love and skill successfully for 33 years.

In a friendly relationship a successor was sought, and the operation has been transferred since May 2015 to Mag. Susanne Claudia Boyneburg Lengsfeld Spendier.  She has many years of experience in the hotel business in Villach and manages the traditional hotel with charm and style and a motivated team.